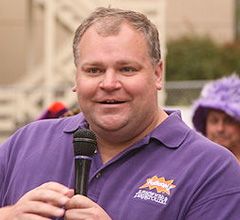 In August 1995, shortly after moving to Washington, D.C., 24-year-old Darell Hammond read a story in the Washington Post about two local children who suffocated while playing in an abandoned car because they didn’t have anywhere else to play. Darell realized this tragedy could have been prevented. The passion was born, the idea was conceived. After attending community college and Ripon College, he helped lead the start-up of City Year Chicago. Under Darell’s leadership, 600 City Year volunteers built two playgrounds and more than 500 community volunteers joined the incredible day of service.